This page uses javascript to help render elements, if you have problems please enable javascript.

Plants that develop air bubbles in their hydraulic system don’t get enough water. Severe cases can lead to the death of roots, branches or the whole plant, explains Dr. Schenk, a plant biologist and CSUF faculty member since 2002. Read the article from CSUF News to find out more 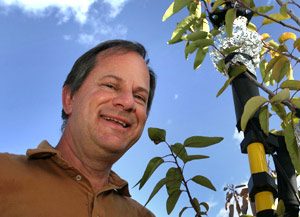 Research in the Plants & H2O Lab at Cal State Fullerton

Research in the Plants & H2O Lab at Cal State Fullerton

Research in the Plants & H2O Lab addresses many aspects of the interactions between plants and water and ranges in scope from plant physiology to the role of plants in the global water cycle. The current focus is on plant hydraulics, the structure and function of plant hydraulic systems, and specifically on how plants deal with air bubbles (embolisms) that can form in their water-conducting systems during drought stress or frost. Our research explores basic physiological mechanisms of plant water transport and drought tolerance, as well as the implications for water conservation and irrigation needs of horticultural plants. Most of the research involves undergraduate and graduate students, and much of the research since the year 2006 has been conducted at the Fullerton Arboretum, mainly on plants in the desert collection, on chaparral hill, the subtropical woodland collection and the cultivated orchard collection. 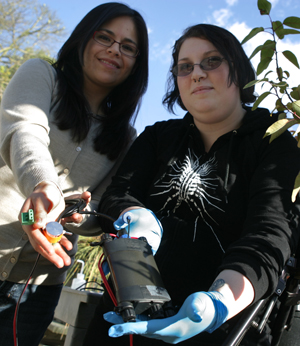 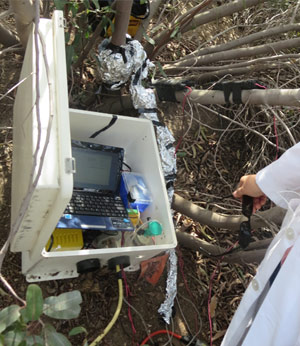 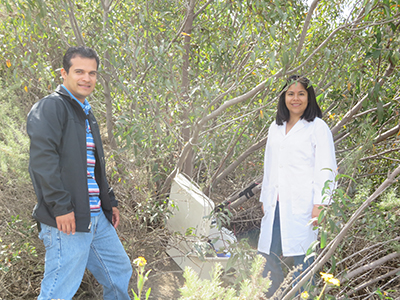 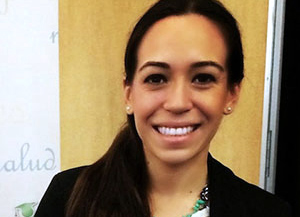 Alex studied the plant Phymosia umbellata (Fa. Malvaceae), a large forest shrub native to Mexico grown in the Arboretum’s subtropical woodlands collection. The goal of this project was to analyze the sap for proteins that may play a role as surfactants and coat bubbles that form in the plants’ hydraulic system under drought conditions. 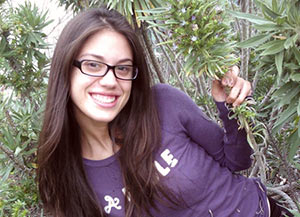 Velia conducted research on ultrasonic acoustic emissions associated with bubble (embolism) formation in the shrub species Echium candicans (Fam. Boraginaceae) and Malosma laurina (Fam. Anacardiaceae). The cohesion-tension theory states that water within a plant moves under negative pressure (i.e., tension). As a plant is subjected to drought, tension increases, which can cause water to rapidly convert from the liquid into the gas phase, forming embolisms. This event, called cavitation, produces ultrasonic acoustic emissions. It is hypothesized that as a plant dries and loses hydraulic conductivity the amount of embolisms increases, and as a result more acoustic emissions are produced. Velia successfully tested this hypothesis for the two species she studied, including Malosma laurina on chaparral hill in the Fullerton Arboretum. 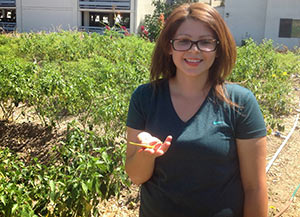 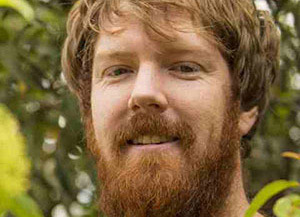 Stem psychrometer measurements allow continuous measurements of plant water status and water stress by measuring sapwood water potentials. Stem psychrometer measurements of water potentials for plants in the field often vary strikingly from those made for the same plants using a pressure chamber, which is the standard method but is destructive and labor intensive. Psychrometers measure water potential as the relative humidity in a small, air-tight chamber attached to a section of exposed sapwood. Psychrometric measurements are highly temperature dependent. Deeply rooted plants, such as the chaparral shrubs Malosma laurina (Fam. Anacardiaceae), Heteromeles arbutifolia (Fam. Rosaceae) and the Mediterranean tree Quercus suber (Fam. Fagaceae), all on chaparral hill in the Arboretum, tap cool water deep in the soil, which may create temperature gradients within the plant that can affect psychrometric readings. The goal of this research project is to correct pyschrometric measurements for temperature gradients in the wood, which would make it possible to use stem psychrometers on many more plants in the field. 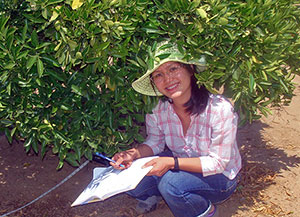 Emily studied the drought tolerance of three citrus varieties in the cultivated orchard collection of the Fullerton Arboretum: Valencia orange, Star Ruby red grapefruit and tangerine. To investigate physiological mechanisms of drought tolerance, she measured the formation of xylem embolisms, air bubbles that prevent water flow through vascular tissues, in stems. She also tested sap-flow sensors on the Arboretum’s Valencia orange trees before installing them on Navel orange trees at UC Riverside’s Citrus Experiment Station for her master’s thesis project. 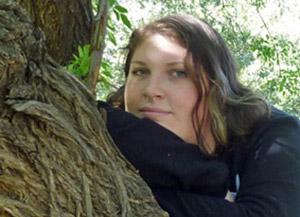 As an undergraduate, Sarah used Laurel Sumac to test a new method to measure the movement of water through plants in real time. This method has advantages over previous methods because it can be used on living plants in the field, allowing quantification of plant physiological parameters in real time and under natural conditions. As a graduate student, Sarah is studying how living cells embedded within the wood of plants are related to hydraulic functioning, especially under drought stress. Specifically, these cells are thought to use sugars to aid in the repair of air-filled xylem conduits. She is still working with her favorite plant, Laurel Sumac, on chaparral hill in the Arboretum. 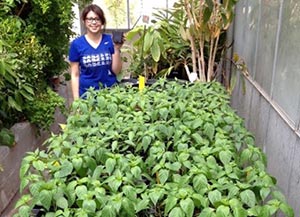 California is currently suffering from persistent drought, which has spurred new interest in developing ways of irrigation that minimizes water use. One way to do this is to irrigate only when plants truly need additional water. Trees continuously adjust their own water balance, and measuring this physiological variable can be useful for irrigation scheduling of orchards. The purpose of this study is to investigate plant-based measures of water stress in avocado trees that can be continuously monitored to be used for irrigation decisions. The level of water stress in the trees will be determined directly using destructive measurements of leaf water potential. Other responses to water stress that will be continuously measured will include stem diameter variations, branch sap flow, trunk sap flow, trunk water potential and wood water content. Leaf water potential, a direct, destructive water stress measure, will be compared to the continuous measurements to determine the best continuous, plant-based measures for irrigation scheduling. 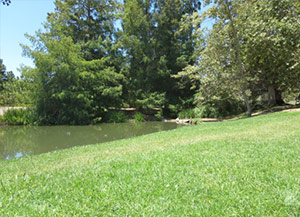 In 2014, Elizaveta Litvak, Neeta Bijoor and Diane Pataki, assessed the contribution of turfgrass and the role of tree shading in evapotranspiration of irrigated landscapes in the Los Angeles region. The Fullerton-Arboretum-managed lawn was one of the eight chosen lawns for this study. They used portable chamber measurements and empirical modelling to estimate irrigated turfgrass evapotraspiration and analyze its variability and environmental control. It was concluded that reductions in turfgrass evapotranspiration caused by shading effects of open-grown trees were more important in influencing total landscape evapotranspiration than the addition of tree transpiration. This suggests that low-density planting of trees that partially shade irrigated urban lawns may be a water-saving measure in semi-arid irrigated environments.

In 2012, Elizaveta Litvak, Heather McCarthy and Diane Pataki, studied stomatal responses to pressure deficit in irrigated trees in the urban landscape of Los Angeles, California. In 2008, sap flux data from the grove of irrigated coast redwood (Sequoia sempervirens) from the Fullerton Arboretum was collected and compared to seven other sites. The study confirms systematic differences in water relations in ring-versus diffuse-porous species, but these differences appear to be more strongly related to the relationship between stomatal sensitivity to pressure deficit and vulnerability to cavitation than to stomatal sensitivity per se.

In 2011, Elizaveta Litvak, Heatehr McCarthy and Diane Pataki, investigated the water relations of coast redwood (Sequoia Sempervirens) planted in the urbanized semi-arid Los Angeles Basin, where the trees often experience leaf chlorosis and senescence. Coast redwoods from the Fullerton Arboretum represented one of the three sites of the irrigated, urban trees that were used for this experiment. It was concluded that water stress was not a direct factor in causing leaf chlorosis and senescence as has been proposed. Instead, the relatively strong stomatal control that is adaptive in the native habitat of coast redwood may lead to carbon limitation and other stresses in semi-arid, irrigated habitats. 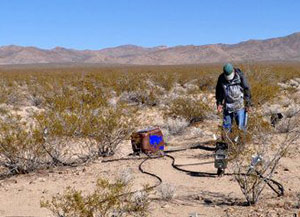 Road Disturbances in the Mojave Desert

Road Disturbances in the Mojave Desert

In 2013, Miguel Macias, Darren Sandquist (CSUF), David Bedford and David Miller (USGS) conducted an experiment to quantify road disturbances in the Mojave Desert. Sap-flow gauges were used on creosote bush (Larrea tridentate) to provide automated and efficient long-term measurements after simulating rain events at three sites on the foot of the Providence Mountains in the Mojave Desert. Miguel Macias is currently collecting stem samples from the Fullerton Arboretum to calibrate the sap-flow gauges and determine the accuracy of the home-made device. 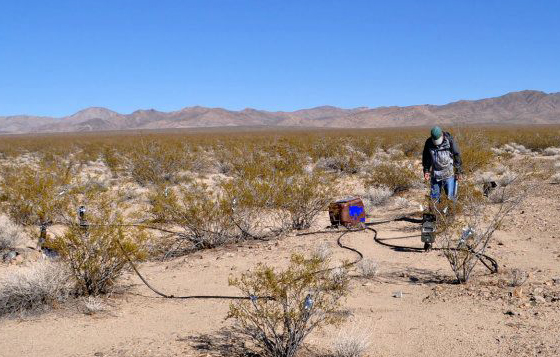 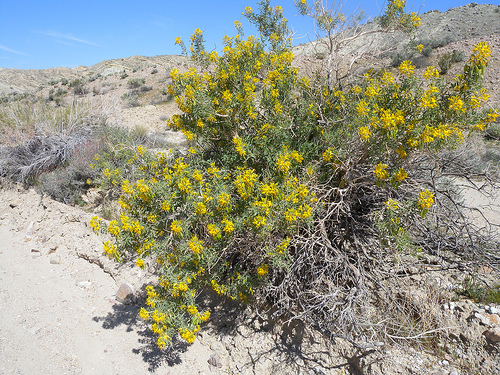 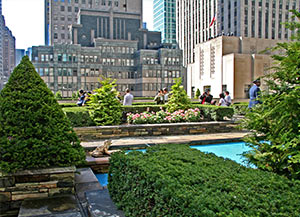 Research on the effects that nature has on us finds that environments with more natural features (e.g., vegetation and plants) as compared to manmade characteristics (e.g., buildings and concrete) are associated with a range of positives, such as coping better with stress (Parsons, 1991) and greater positive affect (Berman et al., 2012). Matthew Ballew, a doctoral student in applied social psychology at Claremont Graduate University, is currently studying the psychological effects of experiences in nature at the Fullerton Arboretum. He hopes to contribute to literature on the causal positive effects from nature and will communicate his findings upon completion of the study.

U-Acre: A Research and Outreach Partnership 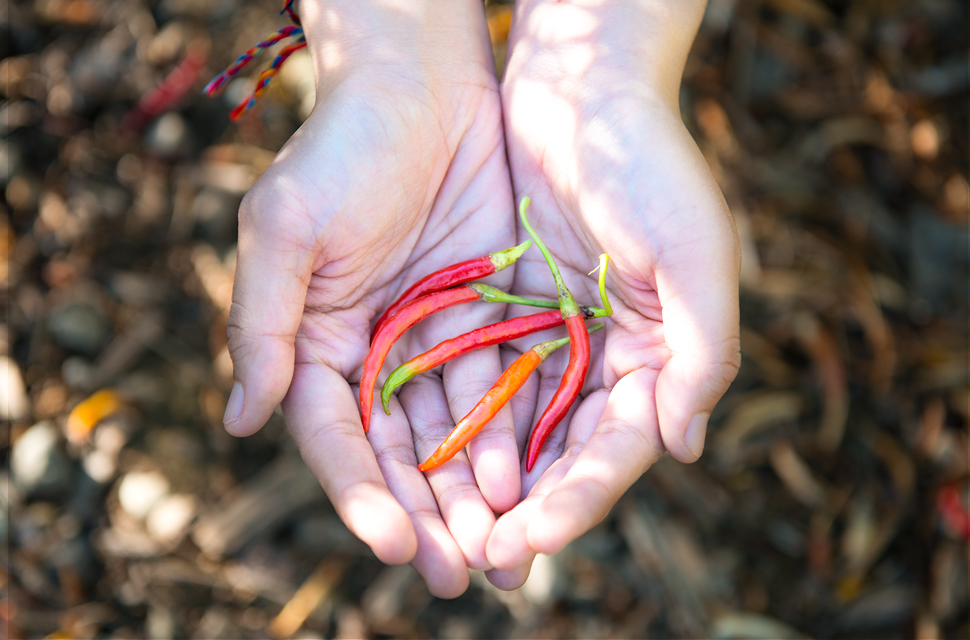 View the article, "The Joy of Eating

," to read about how we partnered with CSUF U-ACRE students for research, outreach and a good meal.

This site is maintained by Extension and International Programs..