CSUF is closed for Winter Recess, December 24 - January 2. We will re-open to serve you on January 3. 2022. Website and online services unavailable on May 29. See IT Disaster Recovery website ► For International Students FAQs, click here ›COVID-19 Vaccine Requirement for Students and Instructors ►

What is a Coniferous Forest?

A coniferous forest is a forest made up of conifers. Conifers are cone-bearing trees that have needle-like leaves and stay green all year long.

Conifer species are found throughout the globe and the only large landmass they are absent from is Antarctica. The most extensive conifer stands are found in the higher latitudes in the Northern Hemisphere through the boreal forests of North America, Asia, and Europe; however, they are also common in tropical areas. 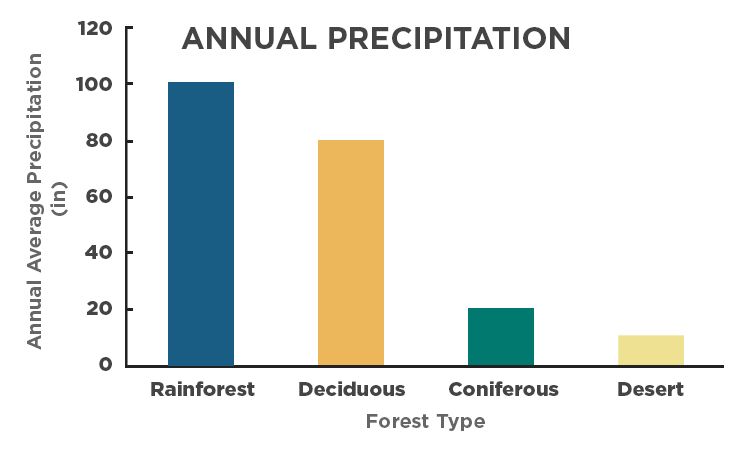 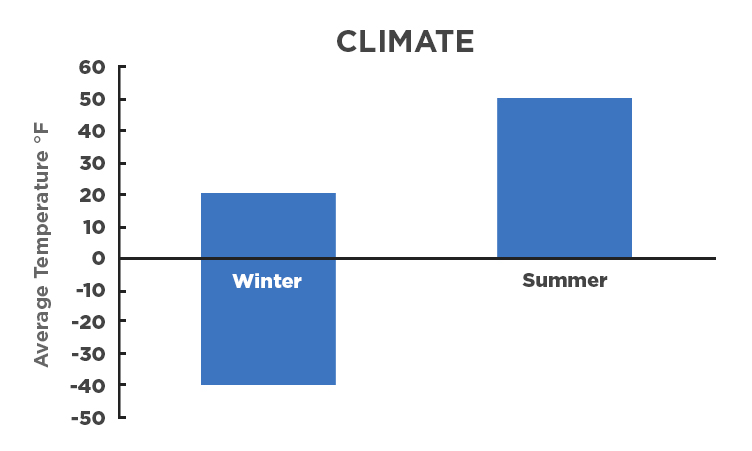 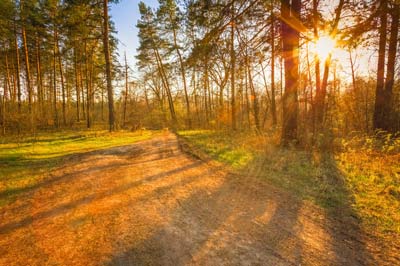 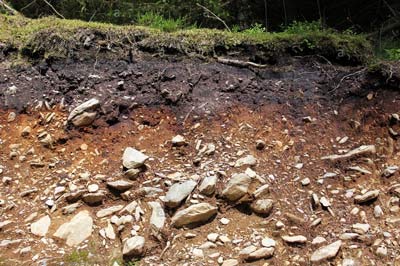 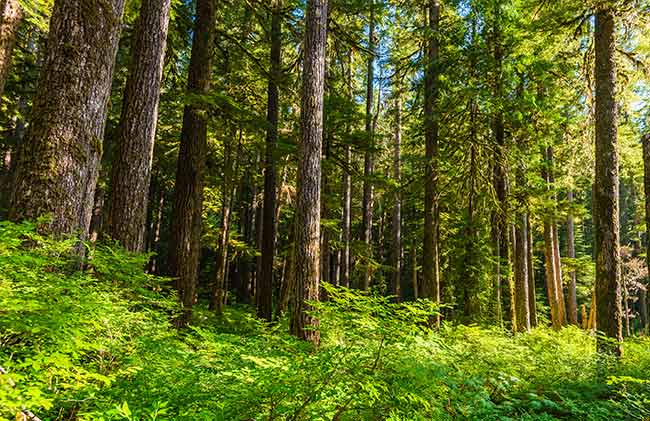 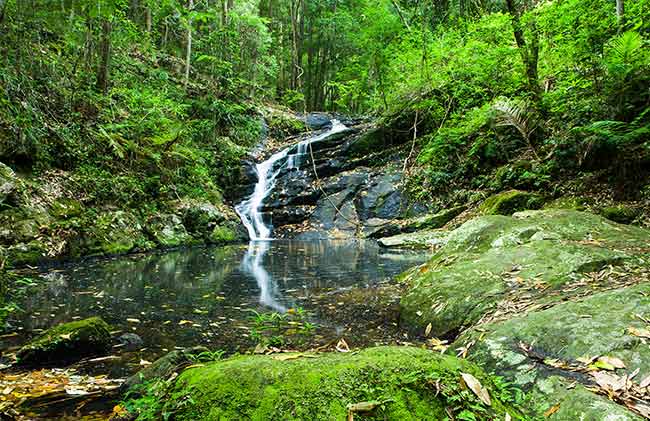 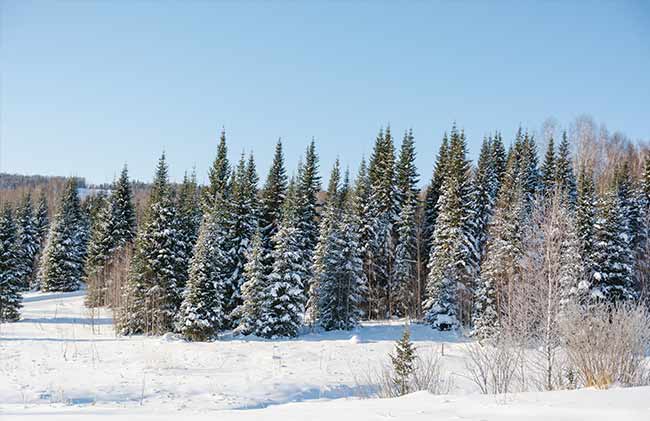 The coniferous forest is structured in only two layers, the canopy layer which is made up of the tallest trees, and the undergrowth layer which has very little plant life around it due to little sunlight and poor soil. This type of soil ranges from a thick mat of undecomposed, to partially decomposed litter with fungi and small arthropods.

Conifers can be identified by five specific traits. To view what these traits are, click on each number to see the name of the trait and a description: 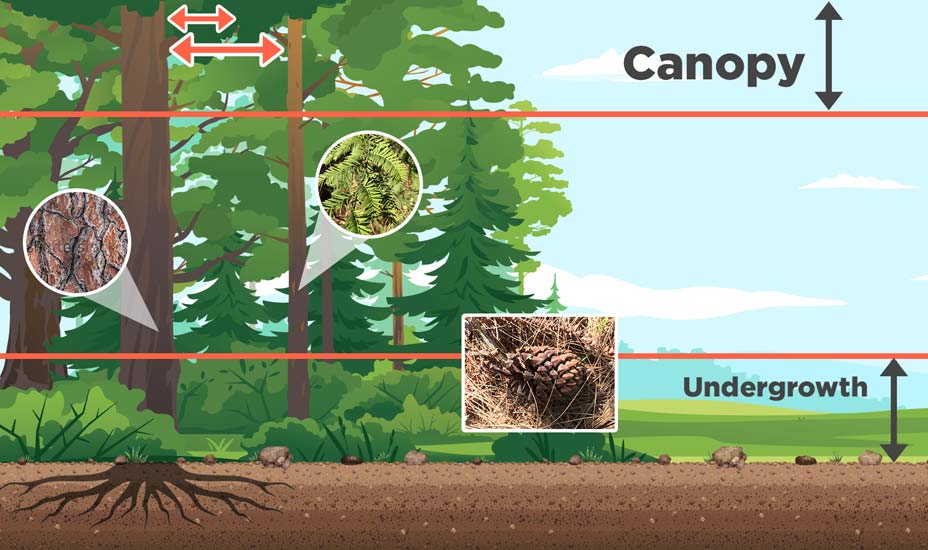 The life cycle of a conifer is completed in six phases, beginning with a seed until its final evolution into a full-fledged cone. 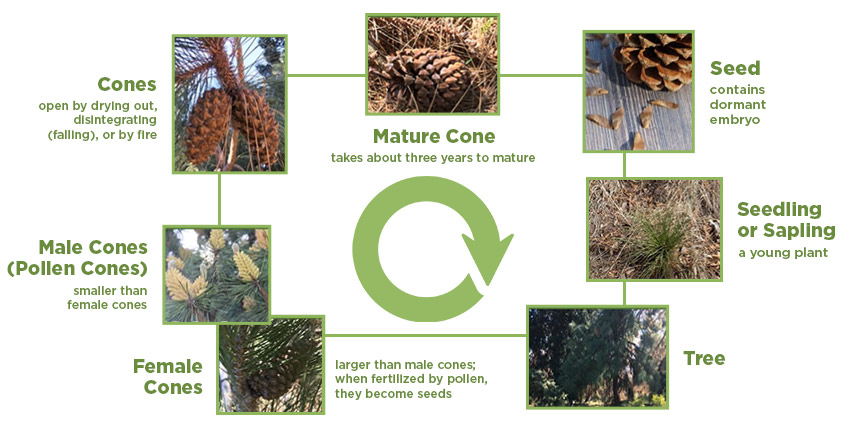 Most northern conifers are adapted to the climatic conditions of cold areas because they are able to withstand low winter temperatures often exceeding -40 °F when the ground is frozen.

In dry conditions, needles are covered by a cuticle, which helps prevent moisture from leaving.

Leaves are full tannings, or chemicals, not tasty, to deter predators. They are often dark green in color and are spirally arranged to capture as much sunlight as possible for photosynthesis.

Most conifers grow relatively shallow roots but some can go as far as 40 feet into the ground, Torrey Pine can grow roots more than 200 ft.

Most conifers are fire-adapted and some cones need fire to regrow and sprout. Fires take away the competition by burning them away. 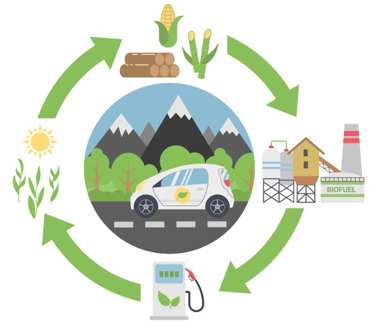 It is important to protect coniferous forests for a number of reasons:

Given the great diversity of conifers in California, there are three notable species to mention: there is the bristlecone pine representing the oldest living trees in the world, some of them dating over 4000 years old. There is the Giant Sequoia tree representing the world’s most massive tree, potentially the largest living organism on Earth reaching heights up to 275 ft. and trunk diameter up to 25 ft. thick. And there are the Coast Redwood trees representing the tallest trees in the world reaching heights up to 300 ft. tall.

Coast redwood, also called California redwood, is the tallest of all living things

Roots: Although roots are relatively shallow, the base of the tree forms massive buttresses for support

Trunk: The bark of the tree is deeply furrowed and can be up to 12 inches thick serving as an insect-, fungus-, and fire-resistant shield.

Leaves: Leaves on the main shoots are spirally arranged, scale-like, and closely appressed to the branches, those of the lateral shoots are spreading, needlelike, and arranged in two rows. They are perfectly adapted to capture fog.

When a tree is cut or damaged from wind or fire, sprouts arise from the sapwood below the injured surface

Cones: Although the Coast Redwood is the tallest tree in the world, they actually produce really small cones. Each of the cones can hold anywhere from 90-150 seeds.

Height: Coast Redwood trees take about 400-500 years to reach maturity and can live up to 1,500 years. They can grow taller than 300 feet with a trunk diameter of 10- 12 feet wide. How tall are you? What is the length of your waist?

Importance: The lightweight wood and resistance to decay makes this tree valuable for carpentry and general construction for furniture, shingles, fence posts, and railroad ties.

Threats:
Why are Coast Redwoods important?
What are some of the threats these magnificent trees facing?

The Torrey Pine is one of the rarest pine species in the United States. It is an endangered species growing along the coast of San Diego County and on the tow of the Channel Islands in California.

Roots: Roots are extensive and can grow more than 264 ft.

Leaves: The leaves are long gray-green needles in groups of five.
Fog: The coastal fog during spring and summer provides enough moisture to supplement the fairly low winter rainfall.

Importance: Endangered in the wild, Torrey pine is planted as an ornamental tree, and is used in native plant and drought tolerant gardens and landscapes.

Not all conifers are evergreen. The Bald Cypress is a deciduous conifer that sheds all its leaves in the fall.

Roots: Roots from Bald Cypress growing in swamps have cone-shaped knees projecting from submerged roots. No one really knows the true function of this knees but it is speculated that they help the submerged roots to breath, and they might help trees with anchorage from floods.

Trunk: A tapering trunk is slightly buttressed at the swollen base. The bark red-brown to silver bark easily peels off.

Importance: The Bald Cypress is native to swampy (freshwater) areas throughout the Southeastern United States. Because its heartwood is resistant to decay, Bald Cypress is used for heavy construction including docks, warehouses, boats, bridges, as well as general millwork and interior trim. The trees are planted as ornamental s northward in colder climates and in drier soils. 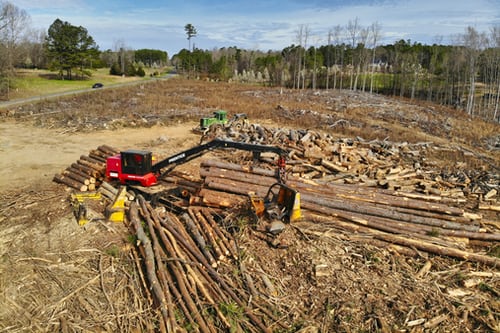 Why should we care?

The coniferous forests are increasingly threatened by many factors, mostly from humans.

One of the biggest threats is deforestation for land development and building construction. Housing residential construction uses lots of wood to create homes and furniture. The result is a loss of habitat and lack of biodiversity.

Also, the current rise in global temperatures is making it hard for coniferous forests to survive and they may be overtaken by deciduous trees which are adapted to warmer temperatures.